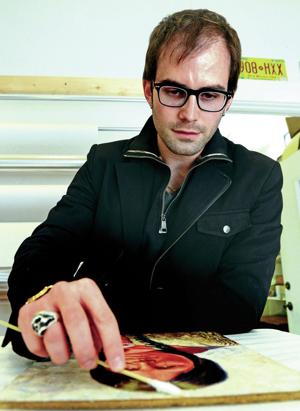 Recently he recalled lying on the floor of his empty Manhattan apartment and crying about leaving that life and career behind. But coming home to Santa Fe turned out to be a good decision for Horowitz, now 32.

He established an art restoration department at his father’s shop, Goldleaf Framemakers of Santa Fe. He now leads the team constructing Zozobra, the 50-foot-tall marionette burned every year at the beginning of Fiesta. And he is engaged to be married in June.

At Goldleaf Framemakers, where he works on restoring and cleaning damaged and dirty artwork, the smell of pungent lacquer and burned cigarettes wafts through the air. Music plays from a loudspeaker against the soundtrack of sanding and hammering.

During a tour, Horowitz expounds on the trade, demonstrating brush techniques and explaining how to iron a wrinkled painting using a monstrous machine that works like an iron.

He has adorned his office with pop culture memorabilia such as a Lego version of the Ghostbuster car, a foot-tall Darth Vader and, of course, Zozobra statues.

Horowitz never was a rebellious child, even during the normally rebellious teenage years. Instead, he said, he found he listened to his parents. They had life experience, so he trusted their judgment.

It was while he was a student at Santa Fe High School that he got involved with the construction of Zozobra. He loved the annual burning as a child and, tapping his chest, suggested he has a visceral appreciation for the spectacle.

Volunteers with the Kiwanis Club of Santa Fe also noticed that he could wield a hammer and perform other crafty tasks with an ease they lacked.

Horowitz went on to The University of New Mexico and graduated in 2005 with a bachelor’s degree in fine arts. His plan, he said, was to become an artist, but he didn’t have a career path to follow. Instead, he snagged a job working at a local art restoration shop in Santa Fe, where he said he quickly discovered he had a natural talent for matching colors, a key skill in art restoration.

But he grew restless with the city’s sparse offerings for younger people and like many new college graduates decided to relocate to New York City. That’s where he got the job with Lowy.

The application process was tense. His interviewer told him he would work a day at the shop, and if he did well he had a job. Then he was handed damaged work by Willem de Kooning, a famous abstract expressionist artist.

“The guy I worked for here [in Santa Fe] would never hand me a painting this valuable,” he said. “It was like, ‘Oh my God, where I am?’”

But he didn’t let the value faze him, and he restored the piece within hours. By day’s end, he had a job.

Horowitz also snagged a Manhattan apartment, and spent his days working in the shop. Come nightfall, he’d go out, often to a place where he could enjoy his pastime, swing dancing. He would fall sleep by four, and clock in a few hours later.

And once-a-year, he’d take his two-week vacation and return to Santa Fe. He would visit his family and friends, but the majority of his time was spent helping to build Zozobra. People called him crazy.

About four years ago, he got a call from his father. The Santa Fe shop had weathered the recession, but his father needed help running it. Around this time, Horowitz noticed he no longer felt the need to go out every night, and instead found himself at home watching TV shows such as Lost.

“I loved every moment in New York,” he said. “But I thought I could go home and do this with my family. It was a tough decision, but I decided to come back.”

And he did. The original plan called for him to become a shop manager, in addition to offering art restoration services. But there was so much demand for restoration that Horowitz spent all his time restoring and cleaning art work. He and his father credit those jobs with providing a needed revenue source to keep the shop going.

Around the time of his homecoming, he ran into his future fiancée at a Valentine’s Day swing dance. They spent the night dancing, and by dance’s end he asked her on a date. She turned bright red, and revealed she had a crush on him in high school. They have been dating ever since and will marry in June.

Horowitz continued to volunteer with the Kiwanis Club of Santa Fe, eventually landing a gig as the head of construction. These days he doesn’t do much building himself. He leaves most of the work to his volunteers, but he will craft Zozobra’s more nuanced body parts such as the jaw or the ears.

Horowitz has no plans to leave town anytime soon, and cites his decision to return as one of the best he made.

“I lived my dream,” Horowitz said. “And now I am coming back, and it’s my choice. And that makes it all OK.”